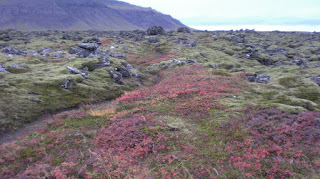 The Berserkjagata is signposted, but it’s hard to locate. As you descend from the pass, you turn left on the main road from Stykkishólmur to Grundarfjördur, the D54, and after a short distance turn right, following a sign to Bjarnarhöfn. After about a kilometre driving through the Berserkjahraun, the road forks. You take the right fork and park on the road just at the edge of the lava field, where the road comes closest to the shore.
Look out for a tiny wooden signpost to the Berserkjagata, but even now it is hard to find. Walk across the grass to the lava and you will find a narrow path cut into the rock. This is the Berserkjagata, the ‘Berserkers’ Street’, a path from Hraun to Bjarnarhöfn cut through the rocks by the two berserkers a thousand years ago.

Follow it. In a few moments, you will find yourself out of sight of the road, alone in a sea of stone. By now you will be familiar with Iceland’s lava fields, but this is a great one to walk through. The lava rears up in agonized, twisted shapes.
The path rises and plunges with the rock. Moss, lichens and berries nibble away at the stone in colours that are both surreal and beautiful: lime green, orange and bright yellow; and in autumn the leaves of the berries flame red.

This walk is at its most atmospheric on a day of mist and moisture, when clouds overwhelm the mountains to the south, and tendrils of mist creep up from the fjord, slinking through the stone towers. This is the point where the lava poured into the sea, creating quiet coves where cormorants and eider ducks paddle, watched by the occasional sea eagle, and the only sound is the water lapping gently at the foot of the stone river.

As you pick your way through the lava field, you eventually come to a depression, which forms a small natural amphitheatre. Just to the right of the path are some raised stones, too flat and square to be natural. They look like a large grave. In the nineteenth century, these stones were excavated, and underneath were found two unusually large skeletons.

How cool is that?
If you would like to receive a free copy of my 60-page novella The Polar Bear Killing and occasional emails about my books, sign up here.
Berserkjahraun Snaefellsnes Vikings