Showing posts from March, 2022
Show all

I explored the north coast of Snaefellsnes, researching the location for my second novel. Stykkishólmur Stykkishólmur is the largest community on the peninsula. A natural harbour is formed by a seabird-strewn island at the mouth of a cove. The harbour is full of fishing boats and a ferry to the West Fjords, on the other side of Breidafjördur.  I dropped in at the local police station to talk to the region’s chief constable and the deputy magistrate, and then went to meet Ásta, an Icelander living in Surrey, who spends her summers in Stykkishólmur working in a hotel there. She told me a little about her childhood in the town. She was terrified of the Kerlingin troll. Until recently much of the town was owned by a Franciscan convent, including the regional hospital of St Francis, which is the biggest building in town. Ásta remembered the French and Belgian nuns, who spoke poor Icelandic, conducting their services in Latin with incense; they seemed to Ásta incredibly exotic. I wondered
Post a Comment
Read more

The holy mountain and Bjorn's harbour 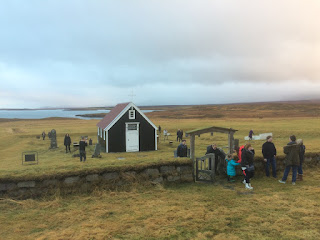 On my search for mythic Snefellsnes, I drove through the Berserkjahraun lava field to Bjarnarhöfn, Björn's Harbour. Bjarnarhöfn I had tentatively decided that this would be Magnus's grandfather Hallgrímur’s farm. I could have invented a farm; perhaps I should have done. Bad things happen in my books at Bjarnarhöfn, and real farmers live there and have lived there in the past. But I much prefer to write about a real place. It’s not just for the sake of the book; it is for my sake when I am writing it. Bjarnarhöfn is seared into my brain; when I am writing a scene set there, I feel that I am actually at that beautiful spot by the fjord. And it is a beautiful spot. It is a large working farm cut off from the rest of Snaefellsnes by mountain, sea and lava. To the east is the Berserkjahraun lava field, to the south, a massive, steep mountain rears up, and to the north and west lies the fjord.  A tiny wooden chapel stands in a meadow between the farm buildings and the sea.  See the
Post a Comment
Read more
More posts