I explored the north coast of Snaefellsnes, researching the location for my second novel.

Stykkishólmur is the largest community on the peninsula. A natural harbour is formed by a seabird-strewn island at the mouth of a cove. The harbour is full of fishing boats and a ferry to the West Fjords, on the other side of Breidafjördur.
I dropped in at the local police station to talk to the region’s chief constable and the deputy magistrate, and then went to meet Ásta, an Icelander living in Surrey, who spends her summers in Stykkishólmur working in a hotel there. She told me a little about her childhood in the town. She was terrified of the Kerlingin troll. Until recently much of the town was owned by a Franciscan convent, including the regional hospital of St Francis, which is the biggest building in town. Ásta remembered the French and Belgian nuns, who spoke poor Icelandic, conducting their services in Latin with incense; they seemed to Ásta incredibly exotic. I wondered how Stykkishólmur had seemed to the Belgian nuns.

Ásta’s father was from a family of twelve who had grown up on one of the islands in the fjord. There are lots of these, especially just offshore from Stykkishólmur. Apparently, there are two things you cannot count: the stars in the sky and the islands in Breidafjördur. They have tried, of course. They have counted more than three thousand islands at high tide, but if you include the rocks and skerries that emerge at low tide, the number is indeed unknown.
You won’t be surprised to hear how all these islands were created. The Kerlingin troll got angry one night, and she threw three rocks at the people of Stykkishólmur. They missed, but shattered into countless pieces.

This tiny little town is home to one of Iceland’s most extraordinary modern churches. The style is space-age Mexican. Smooth and white, it boasts a sweeping tower with three bells at the top, a smooth nave and a bubble apse at the back. The bell tower and the apse reminded me of churches in New Mexico; the rest of the building recalled science fiction films from the 1960s.

Grundarfjördur and the Church Mountain

Further out along the peninsula’s north coast, I passed through the fishing villages of Grundarfjördur and Ólafsvík. Just outside Grundarfjördur is one of the most photographed mountains in Iceland, Kirkjufell or ‘Church Fell’. This is a tower of rock and moss that overlooks a calm lagoon. 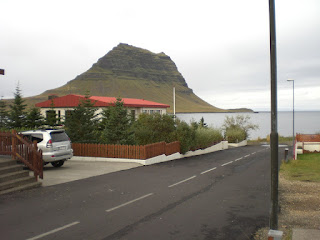 The shifting light and shadow from the low sunlight at this latitude, the constantly changing clouds and even the Northern Lights, illuminate the rock and the moss of the mountain in a shimmering palette of different colours, all of which are reflected in the water beneath it. It is easy to take a great photograph here, and every one is different (to be honest, most are a lot better than mine!).

Ólafsvík used to be the port for Greenland, and a few miles west of the town stands the church of Ingjaldshóll. A local story claims that an Italian nobleman came to stay with the priest there many centuries ago. Christopher Columbus recounted in a letter to Queen Isabella that he had once sailed to Iceland on a Bristol merchant ship, and spent a winter there in 1477, fifteen years before he discovered America. When I first heard that it got me thinking: surely there is a book in that somewhere? It took me seven years to find it: The Wanderer.
Ólafsvík too, has an amazing church (see photo). 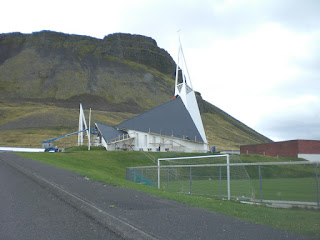 From Ólafsvík I drove back over the mountain spine of Snaefellsnes. This route was even more remote and desolate than the Kerlingin Pass. I was actually climbing the foothills of the Snaefellsjökull, but it was only when I had descended to the south coast that I could see the mountain properly.

It is an almost perfect conical volcano topped by a glacier. Almost perfect because there seems to be a small stone thorn, which looks a bit like a question mark, that emerges from the summit. Much of the time, you can’t see the top.
Clouds love Snaefellsjökull. Billowing white clouds foam over the summit; angry black clouds gather and brood. Often, one white cloud hovers over the glacier, formed from the warming ice in an otherwise blue sky, while the sunlight strokes the ice in yellow, turning to pink as the afternoon fades (see photo above).

I have never made it to the top. Apparently, from the summit on a clear day, you can sometimes see the massive white ice cap of Greenland, shimmering upside down just above the horizon, in the polar mirage known to Norwegians as an is-blikk.

It is a special place. Jules Verne came to Iceland and was bewitched. This is the entrance for the Journey to the Centre of the Earth. In more modern times New Age mystics have flocked to the area. Ley lines spread out from the mountain like a star. Arnarstapi, the little town at the foot of the mountain, is a mystic melange of elves, trolls, gnomes, candles and incense. One blue wooden cottage even has a Tao emblem on its wall. It’s all just a little much. However, there is a good walk a couple of kilometres along the black cliffs to the neighbouring village of Hellnar.

Just to the west of Hellnar is the site of the farm where Gudrid the Wanderer was born in about 970. She was born in Iceland, got married in Greenland, had a child in America, returned to Iceland and then travelled to Rome. All in about the year 1000. The farm is now just a meadow with a rather graceful statue of Gudrun and her son Snorri. Sitting there, looking out over the Atlantic, I thought to myself: wouldn’t she make a good book? Another ingredient for what eventually became The Wanderer, published many years later. It is extraordinary how long it can take an idea for a book to take shape.
If you would like to receive a free copy of my 60-page novella The Polar Bear Killing and occasional emails about my books, sign up here.
Gudrid Snaefellsnes