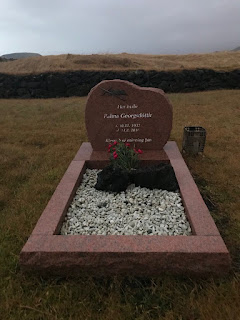 The Icelandic countryside teems with folk stories. Every village or even farm has one, and they don’t just concern elves. We have heard about the trolls, but there are also sea monsters, seals, serpents, polar bears and sorcerers, as well as assorted goody-goody pastors and saints.

There are also ghosts and ‘seers’.

Most towns still have their seers, or fortune-tellers, and many people will explain that one of their extended family has the gift. The country is also teeming with ghosts.
In general, these are more benign than British ghosts. Like the hidden people, they will offer helpful advice rather than scare the living daylights out of you.
One Icelander told me how a relative was able to communicate with her dead grandmother, who occasionally warned her of impending disaster. This relative was reluctant to admit her ability to anyone; she wasn’t an attention-seeker, and it raised all kinds of problems. What should she do with the information her grandmother gave her? Wouldn’t people think she was crazy if she told them she had been speaking to ghosts? So she kept quiet.

She became a character in Sea of Stone, a farmer’s wife, Aníta, who learns unsettling things during the book that she is unwilling to pass on.
In England, I don’t believe in ghosts, and I wouldn’t dream of writing about a character speaking to the dead. But in Iceland? It almost seems wrong not to. There is something about the country, the light, the shadows, the landscape, the rock, the myths, the desolation that makes you feel that the supernatural is natural.

Every other year, in November, a crime-fiction festival takes place in Reykjavík, known as Iceland Noir. In 2018, a group of about twenty delegates drove up to Snaefellsnes and the lovely Hótel Búdir. After dinner, we repaired to the cosy bar, a lava field and a small, isolated church lurking in the darkness outside. Yrsa suggested that we tell each other ghost stories.

The Icelanders had some great ones, well told, and a couple of the Americans present put in a good performance. The British less so. We are uncomfortable with ghosts. But, as an English rationalist, I felt the odd one out; the one who didn’t get what was obviously all around me.

After half a dozen stories, the hotel receptionist asked if we wanted to hear about the hotel’s ghost. We did. Her name is Pálína and she was a chambermaid at the hotel for many years; her grave is in the graveyard beside the church. (See photo above by American crime writer Karin Salvalaggio).
She loved the hotel and she was conscientious. She still is. Staff there have become used to her tidying up late at night; the receptionist recounted several examples. This can be inconvenient. The way the staff persuade her to withdraw and let them get on with things is a simple ‘Thank you, Pálína’, which usually works.

So, if you do come across a ghost in Iceland, be polite.
If you would like to receive a free copy of my 60-page novella The Polar Bear Killing and occasional emails about my books, sign up here.
Photo: Karin Salvalaggio
Iceland folklore Snaefellsnes