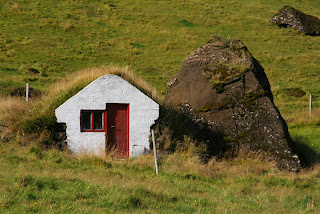 There are certain problems with writing about elves.  I’m not the kind of guy who believes in them. I write about a tough Boston homicide cop: could Magnus really believe in elves? There are no elves in Raymond Chandler’s books, nor in Agatha Christie or even Ian Rankin.

And what about the elf-deniers? These are modern, sophisticated Icelanders who resent the stereotype that their countrymen are gullible hicks who believe in fairies. They claim that those who say they believe in elves are just lying. There is a lot of elf-related tourist tat in Reykjavík gift shops, and while I have never attended the famous elf school, it does sound a little like a tourist trap to me. So I was nervous: was the whole country winding me up about elves? I wouldn’t put it past them.

But I couldn’t write about Iceland honestly and avoid the subject entirely. It was a problem.
Many Icelanders do take elf dwellings seriously. The Icelandic author, Yrsa Sigurdardóttir, is also a civil engineer. She writes:

"My personal encounters with elves are few, only one to be exact. This was in 1997 and occurred while I was supervising a new pipeline being placed in Mosfellsbaer, a suburb of Reykjavík. The contractor doing the work mentioned in a progress meeting that his equipment kept breaking down while attempting to remove a large boulder smack in the middle of the pipeline’s planned route.
He believed this to be the result of elves, that they were sabotaging his equipment to protect their home. This was noted in the minutes of the meeting and the project owner, Reykjavík Energy, needed no further prompting the pipeline layout was altered to avoid the rock. The equipment worked fine after that."

Do Icelanders believe in elves? A small minority certainly do. Most people’s grandmothers do. Some people don’t, don’t think any of their countrymen do either and are profoundly irritated by foreigners asking them about the subject.
In my experience, many, perhaps most Icelanders keep an open mind. They know that the laws of science suggest that hidden people are unlikely to exist. But they are part of Iceland’s society and culture, and of that traditional way of life and world view which in a couple of short generations is in danger of being lost.
Many Icelanders not only regret that loss, but respect the way that their grandparents lived in a kind of harmony with their landscape. It’s something they want to hold on to.

I heard Ed Miliband, former leader of the British Labour Party, interviewing Katrín Jakobsdóttir, Iceland’s prime minister, on his podcast Reasons to be Cheerful. After a serious discussion on gender inequality in Iceland, he asked her about the elves. You could hear the panic in her voice. What should she do – deny an important part of Icelandic culture or admit to believing in the hidden people?
For a second she seemed to be taking the elf-deniers’ side. But then the seasoned politician took over and she pivoted to trolls, explaining how trolls must be stupid because they always seem to be caught out by the sunrise and turned to stone. Miliband pointed out she had probably lost the troll vote, but in fact, she had deftly avoided the elf wars.
If you would like to receive a free copy of my 60-page novella The Polar Bear Killing and occasional emails about my books, sign up here.
Photo: DanielCz via Shutterstock
elves Iceland folklore