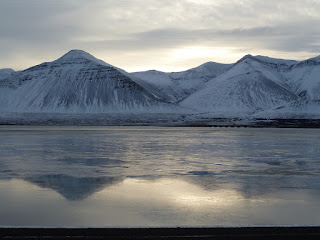 I had identified Snaefellsnes as a likely location for some mythic background for my second novel, so I needed to check it out.
I jumped on a flight to Iceland, hired a car, and drove north. I passed by Reykjavík and turned on to the Ring Road. This is Iceland’s main road, and it is well maintained. It circumnavigates the island, a distance of about 1,300 kilometres. I haven’t yet driven the whole distance, but I am determined to do it one day.

North from Reykjavík the road ducks through the tunnel under deep Hvalfjördur, then emerges and follows the fjord inland for a few kilometres, rounding a mountain on the inland side, and then emerging on one of the most windswept stretches of road in Iceland.

The road is raised and follows a curve with the sea and the flat islands of Borgarfjördur on one side and a high smooth-sloped fell on the other. Gusts of wind are so strong here that cars can be blown off the road. I kept both hands tight on the wheel, and although I could feel the car being buffeted, I made it over the long low bridge that crosses the road to Borgarnes, the main town in the western region.  The photo above is the view over the fjord from Borganrnes.

Just north of Borgarnes, the road forks, and I turned left along a stretch of empty highway, passing the warrior-poet Egil’s farmstead at Borg. On one side, in the distance, I could see the whitecaps of the sea. On the other a high wall of green and grey mountain, a curtain of stone through which the clouds danced, sometimes white and ethereal, sometimes black and threatening. Rain showers came and went, speeding in from the sea, occasionally followed by strips of sunshine and spectacular rainbows. Time to crank up Beethoven’s Fifth on the car’s CD.

Rivers tumbled down in waterfalls from the mountains, hurrying underneath the road towards the coast, water skipping over rocky ledges and pausing for respite in deep clear pools. I passed occasional farms, each with its lush green home meadow, and horses standing hopefully in the fields. What they were hoping for I was not quite sure.

A volcano had spewed its molten guts here several thousand years ago, and left walls of frozen stone, nibbled by green and orange moss. A bump appeared in the distance, and grew: a flat rim like an upturned saucer Eldborg, the dormant crater that had presumably created all this mess.

The road veered to the left just past the crater,and ventured out on to Snaefellsnes. I could see the south shore of the peninsula and the bottom of the volcano, but it and the ridge of mountains that runs along the spine of the peninsula were shrouded in cloud.

At Vegamót, a name on a map that just means ‘Where the roads meet’ and consists of barely more than three buildings, I turned right and climbed a valley cut into the flank of this mountain ridge. This is known as the Kerlingin Pass after the Kerlingin troll. She used to creep down from the mountain at night to steal babies from the local town of Stykkishólmur.
Trolls have to get back to their cave by daybreak, but one morning she was too late and became frozen in stone. You can see her up above the old pass which runs parallel to the road, a column of rock with a sack of babies over her shoulder (see picture below), but at that moment she was covered in cloud. 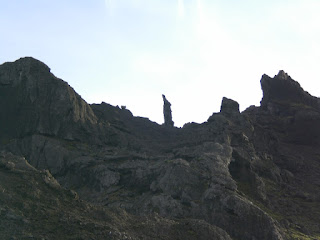 The valley became increasingly narrow as the road rose ever higher, a stream rushing down beside it. Sheep looked up and ran across the road in front of me, timing their foray perfectly so I had to brake. Ewes were followed by lambs as big or bigger than them, desperate for an udder. It was damp, lonely and a great place for a chase at the end of a book.

Over the top and out of the clouds

I was in the cloud now, driving slowly. I rounded a sharp bend, and the road began to descend. In a minute or so I emerged from the cloud into bright blue sky, and a view that blew me away. In front of me was Breidafjördur, or ‘Broad Fjord’, with its countless islands.
Closer by were extraordinary hills, piles of rock and metal that had been created by volcanic activity, hundreds of feet high. Their flanks were brown and grey, but also yellow and red, orange and green as the various metals infused in their fabric had oxidized. Beneath these hills tumbled a sea of stone, waves of frozen lava a hundred feet high marching down to the sea. A single red hut cowered beneath the rock, perched on the edge of a winding lake created by the lava flow several thousand years ago.

And there, along the seashore stood just two farms, the same farms that had stood there a thousand years ago when Vermund the Lean and his brother Styr inhabited them: Bjarnarhöfn and Hraun.

The lava field was, of course, the Berserkjahraun. 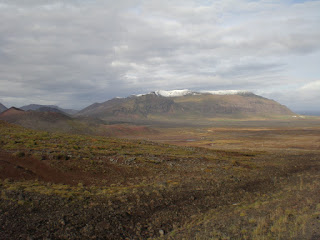