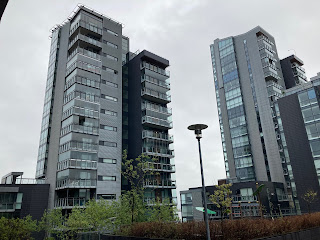 While I had been writing Where the Shadows Lie, happily losing myself in thoughts of sagas, rings, volcanoes and Gull beer, the financial world was melting down around me.
I remembered how I had explained to the German author ten years before that it would never be possible to write a financial thriller set in Iceland, and now the country was smack in the middle of the biggest financial crisis the world has yet seen. Friends urged me to write another financial thriller. I was reluctant.
But I couldn’t ignore it. Especially since I had resolved to write about issues that went beyond Iceland. As a foreigner, I wanted to write about Iceland’s interaction with the outside world, about big issues, not small ones, and there was no bigger issue as far as Iceland was concerned than the financial crash. It was a subject that I knew well, and the intersection of greed, hubris, ambition and self-delusion in the people who caused it was exactly the kind of thing I had examined in my financial thrillers.
Yet I felt I needed to place distance between my new books and my old. It had been hard enough to make the leap from one to the other and I was glad I had done it. Writing about the perpetrators of the crisis seemed a step backwards.
But what about the victims? That interested me much more. Especially since the response by ordinary Icelanders was more immediate and more effective than anywhere else in the world. They began their ‘pots-and-pans’ revolution and it worked. They overthrew their government.
The financial crash slammed into Iceland hard. With hindsight, Iceland may not be the country that suffered most, that honour probably falls to Greece, but the Icelanders suffered first.
Icelanders call the depression after the financial crash the kreppa, which also means ‘pinch’. The financial crisis was started by people throughout the world figuring out clever new ways of getting around stodgy restrictions to borrow too much money. I say clever, but these schemes turned out to be profoundly stupid. What was true globally was also true in Iceland.

As the Iceland Review said in 2009: ‘The crash is the fault of thirty men and three women. All these people are connected.’ In the early 2000s a new breed of young entrepreneur emerged in Iceland. They were called the útrásarvíkingar: útrás is the opposite of invasion, so this literally means something like ‘outvading Vikings’. Let’s call them ‘the Outvaders’.
They were in their thirties and forties, they were ambitious, quick-thinking, decisive and bold. They built successful companies from very little: supermarkets, insurance companies, food manufacturers, bottlers, fund managers. And banks. They invested in high-profile businesses overseas, especially in London: West Ham, Hamleys, Mothercare, House of Fraser, Oasis, Karen Millen. And they did it all with borrowed money.
They had fun. Unlike their low-key predecessors, the old ‘Octopus’ families of import-exporters, they flaunted their wealth. One of the most prominent of these Outvaders was Jón Ásgeir Jóhannesson, the owner of the Bónus supermarket chain, who supposedly amassed debts of $8 billion by the time everything fell apart. He owned a distinctive black private jet that was seen flying in and out of Reykjavík City Airport regularly. He hung out in the bar of London’s trendy Sanderson Hotel. His wife founded Reykjavík’s trendiest hotel, 101. He owned a superyacht in Miami called The Three Vikings, and a ten-foot statue of a Viking with a Fender Stratocaster electric guitar strapped to his back stood proud in his London office.
This kind of consumption was matched or exceeded by hedge fund managers, investment bankers and Russian oligarchs, but for a country as small as Iceland, with its history of poverty and egalitarianism, it was remarkable. Where had all that money come from so quickly?


Iceland’s banks grew in parallel with its businessmen. There were three of them: Landsbanki, Glitnir and Kaupthing. In the 1990s Kaupthing’s capital was only a couple of million dollars. In the 2000s it bought banks throughout Europe, including the venerable merchant bank Singer and Friedlander in London. In 2007 it set up an internet bank, Kaupthing Edge, which took deposits throughout Europe. Within a year the bank had pulled in £2.5 billion of deposits from 160,000 customers in the UK alone. Landsbanki set up a similar internet bank called Icesave in 2006, which operated mostly in the UK and Holland, and within two years it had amassed £4 billion of deposits in the UK.
You know what happened next ...
If you would like to receive a free copy of my 60-page novella The Polar Bear Killing and occasional emails about my books, sign up here.