Publish and be Damned: Magnus I Becomes Where The Shadows Lie 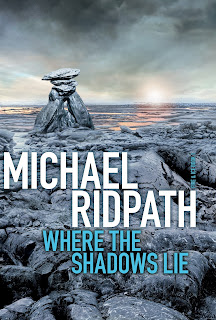 Writing a novel is all very well, but at some point it has to be let out into the world to take its chances.
My agent Carole Blake and I had agreed that her assistant Oli would act for me on this one.  I would be one of his first clients. But he had to like the book.
He read it. He liked it. Together, we came up with a plan. Oli sent the manuscript out.

I was nervous. Extremely nervous.

It takes a while for publishers to respond to submissions, even when supplied by an agent, but I received a couple of quick rejections of the ‘not one for us’ variety. That’s better than the ‘this book is a load of old crap’ variety.
I tried not to panic. I told myself that if a publisher was going to say yes, they would take their time to get back: the manuscript would have to be shown round to colleagues; sales and marketing would need to be convinced. But, frankly, the waiting was difficult. What the hell would
I do if they all said ‘no’? There was no Plan D.

They didn’t all say no. We found a publisher, Corvus, a brand-new imprint set up by Atlantic Books with Nic Cheetham in charge. Nic was young, imaginative and enthusiastic (he is still the latter two if not so much the former). He was setting up this completely new imprint, and he was excited. Kindle was just beginning to take off, and Nic saw it as an opportunity for smaller, nimbler publishers, rather than a threat. His enthusiasm, and that of Oli, fired me up. Publishing was fun again.

Where the Shadows Lie

Magnus I was not a great title, and so I had submitted the manuscript under the title Fire and Ice. Nic had a better idea: Where the Shadows Lie, a reference to the verses in the epigraph of Lord of the Rings. That was a good title.
Where the Shadows Lie was published in March 2010. Someone, I don’t know whether it was Nic or a hidden person I had unwittingly met in Iceland, organized the most spectacular publicity stunt. In April of that year, Eyjafjallajökull erupted, spewing ash into the atmosphere all over the northern hemisphere, stranding air travellers and placing Iceland firmly on the map.

The book did reasonably well in physical form, but thanks to Nic’s efforts the ebook sold extremely well, getting to number one.

Oli swung into action. He managed to sell the novel to fifteen publishers throughout Europe and the United States, mostly on the back of the Lord of the Rings angle. This was very gratifying. But the best news came from the smallest country. Pétur wanted to publish the book in Icelandic.

Phew! No Plan D required. Time to write Magnus II.
By the way, if reading this post has caused a rich of blood to your head and you have a desire to buy Where the Shadows Lie immediately, go right ahead.  Clicking on this link will take you to Amazon and you can click away merrily.
If you would like to receive a free copy of my 60-page novella The Polar Bear Killing and occasional emails about my books, sign up here.
Where the Shadows Lie