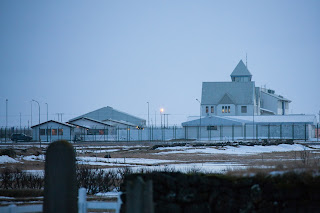 I was looking for two things from my police contact Páll: the details of how the police would undertake an investigation from the discovery of the body to the eventual conviction of the murderer, and what difference Magnus would notice to homicide investigations back home.

Icelandic police have a friendly, almost cuddly image, especially when compared to their American counterparts. They have become experts at Instagram and Facebook, on which they rescue kittens and perform weird dances. It is an entirely different experience being stopped by an Icelandic traffic cop with her helpful smile and bobbing blonde ponytail, than by a shaven-headed American policeman with peak cap, sunglasses, jackboots, a gun wobbling at his hip and that special unsmiling look that asserts authority and, occasionally, fear.

In 2009, the Icelandic police lost their weekend leave when they spent every Saturday protecting Parliament during the pots-and-pans protests. These occasionally turned violent, in a not-very-scary Icelandic fashion. The police mostly showed restraint, although they sometimes fired teargas. There was a lump in Páll’s throat a couple of years later when he told me how peaceful protesters had formed a line to protect the police from the skyr (a tasty Icelandic goo similar to yoghurt) and flagstones thrown at them by a minority of troublemakers.

Iceland vs Britain and America

Yet, there are differences between the Icelandic and American (and British) way of doing things, and they don’t always put the Icelanders in a good light.

Fortunately, the Icelanders have finally scrapped the law permitting the murder of any Turk in Iceland, which had been enacted following the Barbary pirates’ slave raids in the seventeenth century. In 1992 the law was repealed at the insistence of the visiting Turkish national handball team, and you can see their point. It did give the home team an unfair advantage.

The U.S., and to a lesser degree the U.K., set great store in a suspect’s right to remain silent, and in his right to a lawyer to tell him to remain silent. There are also restrictions on how long a suspect can remain in custody without being charged. The result of this is that investigators will often wait before charging a suspect until they have built a strong case against him.

Iceland has rules of arrest and evidence too; they are just different.

When an investigator arrests a likely suspect, he interviews him, usually without a lawyer present. If he thinks the suspect is guilty, he will then get a warrant from a judge to keep the suspect in custody in solitary confinement for three weeks. This is known as the ‘hot period’ when the bulk of the investigation takes place. After three weeks, and only then, the police are required to show their evidence to the defence lawyer, and to ask the judge for an extension, should they require one. The standard technique is to let the suspect sweat it out in solitary for two and a half weeks, and then suggest they confess. Apparently, they usually do.

I visited Iceland’s main prison once — I was planning a novel where Magnus would wind up in jail as a suspect for a couple of weeks.

Litla Hraun looms over the outskirts of the small coastal town of Eyrarbakki, about an hour south of Reykjavík (pictured above). I was shown around by a tall, softly spoken, broad-shouldered warder named Hilmir. There are three wings for the permanent residents, and they are remarkably civilized. The communal kitchens are clean with a widescreen TV, the cells have en-suite showers and computers, although no Internet. The inmates appeared cheery and friendly. I saw a class of three men doing an online university degree; those three securing Iceland’s place at the top of the global rankings for per-capita prison population in tertiary education. It reminded me a little of my daughter’s hall of residence at university in England.

Those were three of the wings. The fourth, actually known as House No 1, was for remand prisoners, in other words, those who have not yet been found guilty.

I saw some of this: individual cells with an internal high-walled courtyard with a plastic roof, around which prisoners are allowed to walk one hour in twenty-four. Hilmir was going to show me some of the prisoners, but one of them was going ‘bananas’. It’s a bit of a problem, apparently, prisoners in that wing going ‘bananas’.

To be fair to Hilmir, his use of that word in English should not be used against him, and he did seem genuinely very concerned with his charges’ mental health. Nevertheless, I got the impression that suspects who were still assumed innocent were thrown into unpleasant solitary confinement. If they confessed, they got to move to the rather pleasant accommodation next door for a few months or years: prison terms in Iceland are low by international standards.

Hilmir told me there is a waiting list for Litla Hraun. Again, a bit like British universities.

It seems to me that this system relies on the fairness and integrity of Iceland’s police and prosecutors to work. But, as in any country, the police are not always fair.

Things are changing. Iceland recently built a newer facility closer to Reykjavík, at Hólmsheidi. I haven't paid a visit yet – I have yet to receive an invitation. And I understand that after criticism from international prison inspectors, the authorities are a little less quick with solitary confinement for suspects.

Iceland’s most notorious case of wrongful arrest involved what was probably a false confession. In 1974, two men, Gudmundur and Geirfinnur, disappeared from Hafnarfjördur, a town to the south-west of Reykjavík near the lava field. Six suspects were arrested, kept in solitary and interrogated. They confessed and were convicted. Over the years, there has been significant criticism of the investigation, and in 2018 five of the six were acquitted. A German security expert from Hamburg was drafted in to help with the original case, and some blame him for the miscarriage of justice.

Memories of this case are still strong in Iceland, and might lead to suspicion of Magnus as another foreign ‘expert’ adviser.