Time for the crime 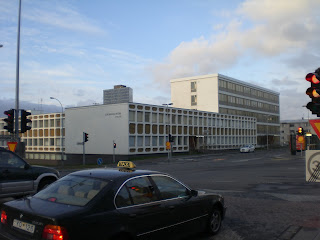 I have decided to pull together these blog posts into a book, which will be published at the beginning of July.
Like this blog, the title is Writing in Ice: A Crime Writer's Guide to Iceland.  The book includes the posts I have published here and more that I have already written.  You can pre-order the ebook or paperback from Amazon.  If you would like a signed copy, or one not sold by Amazon, you can order one from my local bookshop, Lutyens and Rubinstein in Notting Hill, London. 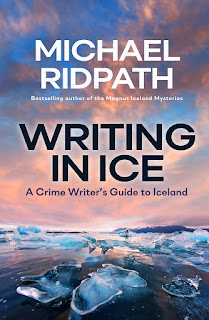 By far my most important appointment on that first research trip to Reykjavík was with my police contact, Páll. Some very successful crime writers get by without worrying at all about police procedure — Agatha Christie springs to mind, but there are many other more modern examples. Others are obsessive, like Peter James. I had always aimed to get the details right in my financial thrillers, and I wanted to do the same in these Magnus mysteries if only to create as vivid a portrait as I could of Iceland.

The perils of police procedure

I am not a total slave to police procedure. Here are two examples that I have been happy to ignore or at least downplay in my books.

Modern major investigations in Britain don’t really involve a brilliant detective and his trusty sidekick interviewing everyone and then confronting the suspect in a lonely house somewhere. There are massive teams, coordinated by a computer, with patient analysis of forensic data, countless pointless interviews, endless watching nothing happen on CCTV footage, and keyword analysis of the inane chatter on the phones and computers of everyone involved.

In the U.S., many detectives don’t even interview their chief suspects until they have conclusive proof of their guilt, and even then they might not go for a confession. Confessions just give opportunities for defence lawyers to attack evidence. No tense confrontations and dramatic admissions. Most suspects don’t say anything anyway; their lawyers have told them not to. These inconvenient modern methods make crime investigations much less dramatic, which is why I usually ignore them. But if I find an authentic and little known detail of police methods, I will happily slip it in.

It’s always useful to have a police contact wherever you are, but you can manage without in the U.S. and Britain, where there are plenty of books that describe police procedures: my favourite is the 1,296-page Practical Homicide Investigation by Vernon J. Geberth.

Unsurprisingly, there are none in Iceland, although a close reading of detective novels gives a few clues. I knew I needed a police contact; he had to be helpful, I had to ask the right questions and to note down the answers.

Being an Icelander, Páll wouldn’t commit himself to a meeting following the email I had sent him two weeks before. This wouldn’t bother me now, but it caused me no end of worry at the time. To my great relief on the Sunday morning of my trip he agreed to meet me at police headquarters the next day.

Reykjavík’s Metropolitan Police Headquarters is a dull grey box of a building opposite the Hlemmur bus station at the eastern end of Hverfisgata (see photo). There is not much remarkable about it: there was still a smell of urine and vomit lying beneath disinfectant about the cells a day after the weekend rush hour.

A Harley Davidson motorbike perched proudly on the landing on the first floor, and a lovely full-size snooker table took centre stage in the recreation room, a gift to the police by the British Army when it left Iceland during the war. One side of the building looks out over the bus station, the other on Mount Esja and the bay, at least from the top floors. Otherwise, this is a typical police station with computers, telephones, photocopiers, box files, public-safety posters, coffee machines and bland interview rooms.

Páll was a softly spoken man about my age, tall and balding. He seemed intelligent and empathetic. He went to high school with a boy who was to become Iceland’s top crime writer, then to university, and after a spell in the police, he studied for a masters in America in criminology. He was a perfect source of information for me and extremely helpful. He looked like a school teacher, more of the modern slightly left-wing variety than the old-fashioned authoritarian: not a stereotype of a policeman at all. I suspect he is very good at his job.

But two murders a year is not many. And, according to Páll, most murders are not that difficult to solve. Gunni is blind drunk and angry in a bar. He breaks a bottle and swings it at Siggi, cutting and killing him. When the police arrive, Gunni yells ‘Keep away or I’ll kill you too.’ Not really one for Hercule Poirot, or even Magnus.

Was it even realistic to set a crime series in Iceland? I dithered. But then I considered Oxford and Inspector Morse. Oxford has about half the population as Iceland, which assuming the same murder rate as the rest of the UK, implies 1 or 2 murders per year. Colin Dexter has written dozens of novels set in the city, and Morse and his sidekick Lewis have appeared in at least sixty TV episodes, each including two or three unlikely murders. Colin Dexter and ITV got away with it, so I think Magnus and I can too.