Guns (or the lack of them) and crime 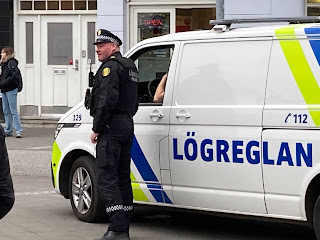 A major area of difference between crime in Iceland and crime in the US that Magnus would notice immediately is firearms. It turns out there are loads of guns in Iceland; you guessed it, the country has the highest per-capita gun ownership in the world. But these are entirely for hunting: handguns and assault rifles are banned. Guns are rarely used in crimes, and the police are unarmed. Unlike the police in the US.

Guns are really important to American policemen. The bad guys are heavily armed: the police need guns to protect themselves and their colleagues. To research this series I read a fascinating book called Into the Kill Zone by David Klinger, which is a thorough analysis of what happens when American police officers shoot civilians.

We have seen in the news examples of this that are unjustified. But many times, police use their weapons in legitimate acts of self-defence. In tough areas they are aware that they might come under fire at any moment, or that someone might make a grab for their gun. There is genuine danger, and genuine bravery. Magnus was a homicide detective in the rougher parts of Boston, and so the absence of guns in Iceland would strike him.

Clearly there is a need for the police to have some access to firearms, and so the Icelanders have a specialized unit, a kind of SWAT team called the Special Unit of the National Police Commissioner. They used to be known as ‘The Viking Squad’, a wonderful name, and in my books they still are. Rural police stations have their own firearms locked in safes; from what I can tell, these are never used on people, just polar bears.

Iceland has much of the technical support that is available to advanced police forces. Many of its senior officers have studied abroad. There is a forensics unit based in Reykjavík who will dash off anywhere in the country to a murder scene. They have a computer forensics department, something that is ever more important as phones and laptops contain so much of people’s lives. DNA must be sent for analysis in Norway or Sweden, which can take weeks. There are

an increasing number of CCTV cameras throughout Iceland.

A camera I spotted on a trip north intrigues me. About 50 kilometres north of Reykjavík on the Ring Road that circumnavigates the country, is a tunnel beneath Hvalfjördur (Whale Fjord). As you emerge, a little camera snaps your license plate. This is about the only route to get from Reykjavík to the north, so it should be possible for the police to check every car that makes that trip. Useful when checking up on suspects.

At first, I was careful to note down the various departments within the Reykjavík Metropolitan Police, but they have been reorganized at least twice, and often the names don’t translate well into English. Many Icelandic crime writers and their translators use 'CID', and that’s probably the best bet, although I use the now defunct title ‘Violent Crimes Unit’. The man in charge of the whole country’s police service is The National Police Commissioner, which is a good title.

Rural police organization changes just as rapidly. I have visited a number of police stations around Iceland. At the biggest one in a region, there is normally a chief superintendent, but he or she may have only a dozen officers whose job it is to police a large region encompassing several small towns. If there is a homicide, then they will often call in specialist support from Reykjavík (ie Magnus).  There is therefore a lot of driving involved, but also opportunities for Magnus to range outside Reykjavík to solve his cases.

There are drugs in Iceland: cocaine, amphetamines, ecstasy and marijuana. Lithuanians are often blamed, as are the Dutch and Hell’s Angels. The first bank robbery in Iceland didn’t occur until 1985; apparently, it’s difficult to rob banks where everyone knows everyone else.

There have been no serial killers, and Icelanders believe their streets are safe; babies are left in pushchairs outside cafés, and young women roam around Reykjavík all night alone. Sadly, a murder in 2017 made some Icelanders rethink this. A twenty-year-old woman named Birna went out for a night on the town one Saturday in January and didn’t come home. She was last seen at 5 am on the streets of Reykjavík.

The whole country went looking for her; after a few days someone found her shoes in the lava field near Hafnarfjördur — disturbingly, the same lava field which Pétur had suggested to me many years before would be a good place to hide a body.

Eventually, her body was found washed up on the shore on the south coast of the Reykjanes Peninsula. The police identified two suspects: fishermen from a Greenlandic trawler that had docked in Hafnarfjördur. They sent a helicopter out to the boat to pick them up.

The nation was shocked. It was one of those tragic times when an innocent place becomes that little bit less innocent.