More Reykjavík: Laugavegur and the 'burbs 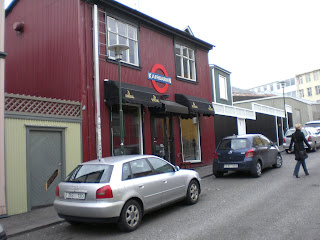 My Reykjavík researches continued along Laugavegur, which is Reykjavík’s smartest shopping street. Laug means ‘hot spring’, so this was the road from Ingólfur’s original Norse settlement to the geothermal spring, which is now a swimming pool with hot tubs near Borgartún.
It became the route women took to do their washing, and presumably a crowded thoroughfare on Saturday, or laugardagur, when everyone went off for a bath. It’s still a hot place on Saturday night, after my bedtime, since most of the trendy clubs and bars are on this street.

The trendiest of these is Kaffibarinn (see above). This is a small metal town house, painted bright red, a few yards up Bergstadastraeti from Laugavegur. It is easily identifiable by the London Underground sign hung above the door. It has an awesome reputation: the place to go on a weekend night for music and violent dancing. It’s supposed to be or have been part-owned by Damon Albarn of Blur, but it’s hard to pin that factoid down: maybe he had a drink there once. Iceland’s most famous film director, Baltasar Kormákur, met Hallgrímur Helgason at the bar there, and decided to make a film of his book, 101 Reykjavík.

The bar itself is a very pleasant place to go during the day, or an early weekday evening. Warm, cosy, wooden, old, with trendily dressed and laid-back bar staff. By night, things change, as I found out several years later.

I went to dinner at my publisher Pétur’s house one Saturday. I told him and his guests I planned to go to some clubs afterwards for research purposes. Dinner was wonderful, but it dragged on, and we all drank quite a bit. I assumed everyone had forgotten about my plan. Finally, at 2.30 a.m., an author there announced it was time to go to Kaffibarinn.

It was a bewildering experience. The music was loud, the beat insistent — fair enough. The room at the back was heaving with a mass of bodies, mostly Icelandic, all drunk or high, swaying and writhing. It was summer — at 3 a.m. it was dawn or dusk or something — and the dim daylight seemed to give everyone an illicit energy.
Inside elbows and feet were jabbing. Outside, there was much shouting, swearing, baring of stomachs and chests, and vomiting. We left after an hour or so, because one of our group was embarrassed at jostling into her students from the university.

I found it extremely interesting, but it would be wrong to say I enjoyed it. I’m way too old.

But I do like a scruffy pub, and I thought Magnus would like one too. Two Icelanders in London had recommended I try the Grand Rokk, which lurked off Hverfisgata between Laugavegur and the bay. Sadly, this place is no longer open. To get in you went through a white picket gate in a white picket fence past a small outside tent for smokers.
Inside, the bar was wood-panelled, cosy and smelled strongly of spilled beer. A row of steady drinkers lined the bar: two old guys with grey hair and flat caps, a red-faced man with a bushy beard, a chubby American girl with short blonde hair and a chubby Icelandic friend, a Filipina and a shaven-headed Swedish guy in leathers. They all seemed to know each other, and the conversation was general and amiable in a mix of Icelandic and English.
The older guys had shot glasses of spirits to chase their beers. A few feet away from the bar two men were playing chess. A particularly ruddy drinker suddenly started singing ‘In the Summer Time’ from Porgy and Bess in a rich, sensuously slurred baritone. Everyone ignored him.

A good bolthole for Magnus.

Sadly the Grand Rokk went bankrupt and is closed now.

A city isn’t just its centre. I needed to get outside to the suburbs; that is after all where most of the people live and much of the crime is committed. So I spent a couple of days on buses. The Reykjavík bus system isn’t too difficult to figure out, and the drivers are helpful. It’s great for people-watching: it seemed to me that many ordinary Icelanders looked a lot like ordinary Britons, or to be more accurate, ordinary Scots. I was reminded of all that British and Irish DNA in the Icelandic genome.

The centre of Reykjavík has character, the outskirts don’t. The town has grown rapidly in the last fifty years, swallowing up the farms that surrounded it in uniform housing estates. There is an inner ring of housing built in the fifties and sixties, which now has a kind of grey pebbledash East German retro charm. Some of the fancier houses in the suburbs show signs of architectural imagination, but frankly, not many.
Oddly, there are some stunning modern churches, for example at Mjódd and Grafarholt. But the suburbs are also infested with dual carriageways, car dealerships, DIY stores, IKEA, small squat office blocks and billboards. 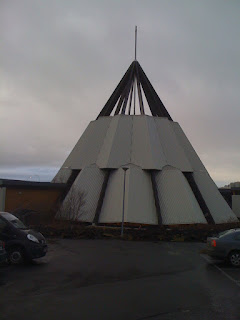 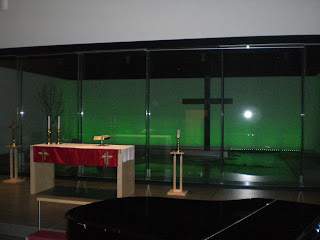 Altar at Grafarholt church
Some of the developments were under construction, some more had been abandoned half-built. The crash was coming. The only difference between Reykjavík’s dull suburbs and those of its American or European equivalents are the stunning views: of Faxaflói Bay and its islands, of Mount Esja, of the heath and mountains to the south, and of the dramatic black lavascape stretching towards Keflavík to the west.

If there is a tough suburb of Reykjavík, it is Breidholt. This is where rich men say they grew up in rags-to-riches stories, it’s where drug dealers live in novels and where people are interviewed about poverty in magazine articles. It all looked quite pleasant to me. It’s a reminder that high-crime areas in Iceland don’t resemble Baltimore, or Chicago’s South Side, or the Moss Side in Manchester or Harlesden in London. Frankly, the East Anglian town of King’s Lynn is scarier, and King’s Lynn is not very scary.

Breidholt has its gangsta rappers. One of them, Móri, describes life in Reykjavík’s grittiest streets:
‘I’ve been around. I’ve seen the darker side of life. I lived in Breidholt for a while. There is a drug dealer in every house there. There was also a gunfight there last year. But now I live in a nice area with my girlfriend and my pet turtle. I used to have two pet turtles but one of them died after the police raided my house and forgot to feed it. They didn’t even have a warrant.’

At the other end of the social scale is Seltjarnarnes, a neighbourhood just to the north-west of Reykjavík, sitting on a peninsula (a nes) jutting out into the bay. It’s flat and windswept, but there are some wealthy roads here, many of the houses on which were bought by ‘quota kings’, fishermen who made a killing by selling their fishing quotas.
Some of the new breed of entrepreneurs live here too. One of these wealthy streets is named Bakkavör, which is also the name of a large food company now headquartered in London and founded by two Icelandic brothers.
The houses themselves are modern and nicely designed, but not large. They look nowhere near as impressive as similar rich neighbourhoods in other capital cities, but that is in itself impressive. At least to me.

At the tip of Seltjarnarnes is the lighthouse and beach of Grótta.  More about that next time.
If you would like to receive a free copy of my 60-page novella The Polar Bear Killing and occasional emails about my books, sign up here.