One degree of separation: Icelandic society 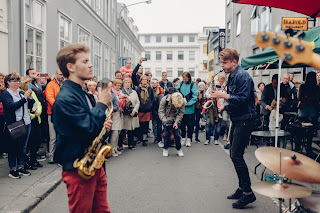 Magnus is an Icelander and an American, which can be confusing for the poor guy.   He has to fit in.  But fit into what? What is Icelandic society like?

Tucked into that per-capita list in my last post, was ‘gender equality’.  The generalisation goes that women are tough, independent and well-educated in Iceland.  Although they are not paid the same as men, pay is closer than in other countries.  Iceland had the first elected female president, Vigdís Finnbogadóttir who was elected in 1980.

The success of women is ascribed by some to the fact that many were left alone to manage while their husbands went away to sea.  Some say that having children early helps.  Women will often have their first child while still at university, which means that when they are in their early thirties they have older children and are able to struggle with men on equal terms on the career ladder.

On Friday 24 October 1975, Icelandic women went on strike for a day, refusing to go to work or to do any chores around the house or look after children.  Ninety per cent of Icelandic women participated.  The men prepared: employers bought paper and crayons in anticipation of kids joining their fathers to work, and easy-to-cook sausages sold out in the shops.  The strike was successful: in 1976 Parliament passed a law guaranteeing equal pay.

And yet sexism is not unknown in Iceland.  In 2018 a group of mostly male politicians were recorded by a fellow customer in a bar near Parliament discussing what they would like to do to their female colleagues, causing uproar and demands for resignations.  Domestic abuse is still a real problem.

As is alcoholism.  Many Icelanders are binge drinkers.  They share this with many northern countries, places where winter nights are long.  And, despite the extortionate prices, they somehow manage to get drunk at the weekend.  Which, I have to admit, can be fun.

Icelandic families used to be large.  Two parents, nine children and an extended family of cousins and aunts.  When the parents were in trouble, the father lost at sea, for example, relatives would step in.  Families are often large now, but in a different, more complex, way.

I mentioned that people have children young.  They don’t necessarily get married young, or get married at all.  Many people get married several times to other people who already have children.  A child may have several parents and step-parents, and a minibus full of siblings, step-siblings and half-siblings, and an aunt her age.  Grandmothers in their forties help out their daughters with child care.

It all seems to work, in fact it seems to work very well, but I wonder what effect if any this breakdown in the nucleus of the family has on children.

How equal is equal?

One of the global measures that Iceland seems to score very highly is equality.  And at first glance, it does seem to be a classic Nordic social-democratic society where everyone respects everyone else, everyone calls everyone else by their first names, and everyone goes to school together.  This derives from the shared hardship of a community of poor farmers and the historic lack of an aristocratic or governing class.

And yet, scratch beneath the surface . . .  At the beginning of the twentieth century a small group of families, known as ‘The Octopus’, controlled trade into the country.  They were rich, the rest of the Icelanders were poor, but they kept a low profile.

These were joined and in some cases supplanted by a new generation of entrepreneurs and bankers in the 1990s and early 2000s, who rode the boom.  They bought newspapers and some of their friends became politicians.  When the bust came in 2008, known in Iceland as the kreppa, this group was badly bruised but survived.  Many Icelanders are still resentful of them.

In a society where networks are so integral, cliques develop.  My own experience is that the bankers know the bankers and the writers know the writers, but they don’t know each other, or not very well – although I do know one writer who is both.  It’s not a rigid class system on the classic British model.  But it’s not a social-democratic paradise of equality either.

I mentioned how history can resonate in current Icelandic society.  But one aspect of the past which seems for some reason to have left no trace is the thirst for blood of the Vikings.  Icelanders are peaceable, at least when sober.  The country has no army, and although Iceland is a member of NATO, joining caused mass demonstrations.

Cynics might say they only joined for the money flowing from the U.S. airbase at Keflavík.  A young male culture that venerates toughness and strength when faced with nature, does not produce enthusiastic soldiers, or anything more violent than the magnificent cry in unison of ‘Huh!’ with a thunderclap at Iceland football games.  Apparently this isn’t Viking at all, but was imported from Motherwell Football Club near Glasgow.

Icelanders can be rude behind the till in a shop and look as if they want to be somewhere else, but that’s only because they are thinking through their chord change at the gig at the Kaffibarinn that evening.  You might have been cut up by a guy in a Jeep on his mobile phone with no indicator flashing, but he has things to do and people to see.  Icelanders may never include you in a round of drinks in a bar, but that is only because they haven’t had time to take out the mortgage to pay for it.

In my experience, Icelanders are warm, friendly, generous, kind, interesting, well-read and have the sharpest of senses of humour.  And that’s a generalisation I am willing to stick by.

To understand Icelanders, I believe you need to understand Bjartur.  Bjartur is the independent hero of Halldór Laxness’s greatest novel, Independent People.  The book is set at the beginning of the twentieth century.  Over eighteen years as a shepherd, Bjartur saves the money to buy his own farm on some very marginal land.

Bjartur’s life is a struggle to eke a living out of this farm, called Summerhouses.  He marries twice, faces starvation and destitution, but never gives up on his dream of remaining an independent farmer.  He is stubborn to the point of cruelty  He is also a poet and sensitive to the folklore around him.

Why make Magnus American and not English?  He could easily be a detective from Scotland Yard who had been sent to England as a child.

I considered this initially.  But as I began to understand Icelanders, I realized Britain wouldn’t work as well as America.  Icelanders fit in very well in London, and a London detective would have little trouble fitting into Iceland.  The irony, the reserve, the reluctance to use guns: that would all seem familiar.  It seemed to me that an American homicide detective would notice more differences, and would have a harder time fitting in, which would make for a more interesting series of novels.

Understanding Magnus’s American background and experiences brought its own challenges.  I don’t make life easy for myself.

So, I had my detective.  I had my plot.  I had studied the language, spoken to Icelanders in London and read widely about the country.

It was time to go there.  More on that in my next post.

Photo by kondr.konst via Shutterstock