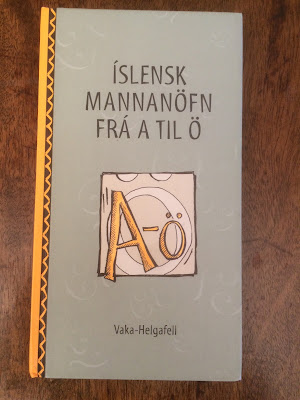 Which brings us to names.  The Icelanders have a unique approach to naming people.  It ranges from the simple Jón Jónsson, a boy’s name, to the more complicated Boghildur Dögg Skarphédinsdóttir, a snappy girl’s name.   The system works as follows.

Your ‘last name’ is your father’s name, plus ‘-son’ if you are a boy, and ‘-dóttir’ if you are a girl.  There is no surname in a conventional European or American sense.

So I would be Michael Andrewsson, since my father’s name was Andrew.  My sister would be Mary Andrewsdóttir.  My grandfathers’ names were Claude and Conrad, so my parents would be Andrew Claudesson and Elizabeth Conradsdóttir.

This seems noble is some ways: our parents are honoured and my sister and mother have names which respect their sex – there is something fundamentally illogical about the English name Jane Johnson, for example.  But our tight little family of four all end up with different last names, which can be a little weird when we try to check into a hotel together.

Of course, all rules are made to be broken.  During the nineteenth century some Icelanders affected Danish-style surnames, often having returned from university there.  Thus there are a few Icelanders who go by the traditional European naming system – Élin Briem, for example.  Other examples of surnames are Blöndal, Thorlacius, Hansen, Nordal and Möller.  This practice was banned as un-Icelandic in the twentieth century, but those who already had Danish-style last names could keep them.

Diminutives are often used: Gunni, for Gunnar, Magga for Margrét, Maggi for Magnús.  There are thirty-five confusing boys’ names beginning in ‘Sigur-’ and thirty-three girls’ names.  Fortunately, the boys are all called Siggi and the girls Sigga.

In times past, the Vikings were more imaginative with their nicknames.  The sagas include Audun the Stutterer, Eystein Foul-Fart, Ulf the Squint-Eyed, Thorberg Ship-Breast and Ljótur the Unwashed.  My favourite is the name of one of the most influential of the original settlers in Iceland, Aud the Deep-Minded, daughter of Ketil Flat-Nose.

In more modern times, as the number of Icelanders has proliferated, it has become more important to tell the Jón Jónssons apart.  Hence the increasing use of middle names, many of which are one syllable, such as Örn, Thór or Dögg.

You may have wondered how I knew there were exactly thirty-five boys’ names beginning with ‘Sigur-’.  You did, didn’t you?  Well, there is an official book of names, which I have open in front of me.  You cannot give your child a name unless it is on the list.  Every year a committee adds to the names.

The book is stuffed full of wonderful Nordic creations such as Gunnthóra, Dagbjört and Ragnheidur, but there are also the more conventional biblical Davíd, Símon and Tinna, as well as modern-sounding Karlotta and Marvin.  Somehow Michael crept in there, along with Carl, Cecil and Christian, even though the letter ‘c’ doesn’t really exist in Icelandic.  Disappointing.

The Icelandic last name, a patronymic, is subtly different from the European surname.  Gunnar Jónsson is the Gunnar whose father is Jón.  Whereas Michael Ridpath means that I am part of the Ridpath family as well as being called Michael.  More practically, there are many more Michaels than Ridpaths.  So, in more formal situations, or in official lists or phone books, for example, I would be known as ‘Mr. Ridpath’, or show up as ‘Ridpath, M.’

This doesn’t apply in Iceland.  ‘Jónsson’ is more or less as common as ‘Gunnar’.  And Gunnar is more Gunnar than Jónsson.  So Gunnar is called Gunnar in most situations, however formal, even if he becomes President, and he will be listed as Gunnar in the Reykjavík phone book.

When Magnus came to the U.S. to be with his father, this caused difficulties for the American bureaucracy, and so he took his father’s last name and anglicized it slightly to Jonson.  Of course, when he returned to Iceland, he retook his father’s first name for his last name.  So Magnus Jonson became Magnús Ragnarsson, a constant reminder of his confused identity.

I try to show this by employing the American ‘Magnus’ in prose or when characters are speaking in English, but ‘Magnús’ when they are speaking in Icelandic.  It drives my copy editors mad.