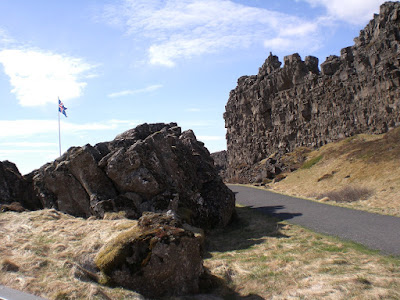 Thingvellir is one of my favourite places in Iceland.

Thingvellir, or ‘Thing Valley’ is one of those rare places in the world: it is steeped in history, it is geologically extraordinary and its beauty takes your breath away.

It is about forty kilometres to the east of Reykjavík.  Once you escape the city’s suburbs you turn inland and drive through dramatic, desolate mountains.

You descend to the entrance of what is now a national park, and after a kilometre or so stop your car at the floor of a green valley.  To the east rise rough foothills, to the west a dramatic cliff face of grizzled grey rock.  A clear stream runs through the valley past a church to a sizeable lake, Thingvallavatn. 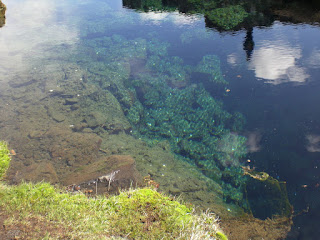 Small wooden bridges span the river.  Stop on one of these and stare into the stream into deep pools of clear water whose colour changes and shifts depending on the sky, the clouds and the angle of the sun.  A host of native Icelandic plants line the pools: birch, willow, crowberries, bilberries, heathers, tiny flowers and all kinds of mosses and lichens.  In autumn, these pools reflect red, yellow, orange, gold and russet, and become the subjects of some of the most stunning photographs in Iceland.

You take a footpath up to the cliff from the valley floor.  It turns out that the cliff is actually two cliffs, with a narrow gorge, known as the Almannagjá, running between them for five miles parallel to the valley below.  This is part of the long rift that runs diagonally from the north-east of Iceland to the south-west, separating Europe from North America, a rift that incites volcanoes, earthquakes, and the mysterious depths of Lake Thingvellir, where scuba divers explore the scar between continents underwater.

A river, the Öxará, tumbles over the top of the cliff and along the gorge in a couple of powerful waterfalls, before falling down to the valley.  As the North American and European continents grind up against each other, the valley moves; geologists estimate that it has widened by about eight metres and subsided by four metres since the country was settled a thousand years ago. 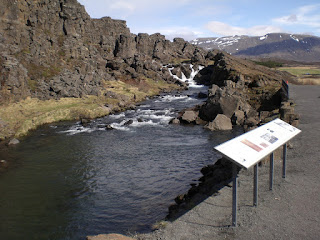 And now comes the history.  At the top of these cliffs, the Law Speaker’s Rock juts out, from where the Law Speaker could look out over the godar and their companions assembled in the valley below him.  You can still see the rock and the ruins of stone booths where the godar stayed during the Althing.  Here the intricate legal stratagems devised by Njál in Njál’s Saga were acted out.  And in the tumult of the Öxarárfoss, witches were drowned.

This place has a claim to be the site of the oldest parliament in the world.  But rather than being housed in a magnificent building, it is located outside in a valley of desolation and beauty.

Standing in the Westminster Hall of the Houses of Parliament in London, you feel a sense of awe in the womb of the ‘mother of parliaments’.  The sense of awe you feel when standing by the Law Speaker’s Rock at Thingvellir is in some ways very similar, and in some ways so very different.

In 1944 Thingvellir was crowded with Icelanders celebrating independence.  It was filled again in 1974 when they were celebrating the centenary of their constitution.

It can get crowded too in July and August, this time with tour busses.  For Thingvellir is one of the three stops on the tourists’ ‘Golden Circle’, the others being Gullfoss and Geysir.  Last time I visited was on a damp Friday morning in November, and it was nearly empty.  And very beautiful.