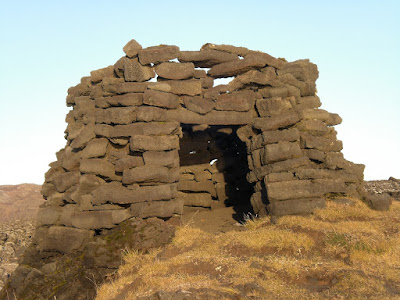 In my last post, I talked about how Iceland came to have a system of government with no actual ruler, but a parliament of the chieftains, known as the Althing.  This lasted until the late thirteenth century, when there were a series of armed clashes between the chieftains, ending with an appeal in 1264 to the King of Norway to take charge and sort things out.


This turned out to be not such a good idea in the long term. The plan was for the Althing to maintain its authority, but over time the power of the Norwegian king in Iceland’s affairs grew. Then, in a bewildering session of a medieval version of the board game Risk, Norway and Sweden united with Denmark. The Danes ended up being in charge, and over the following centuries they established a monopoly of trade with Iceland. Iceland became a very poor country, one of the poorest in Europe.

At this time also, Europe was in the throes of the mini-ice age. The climate was becoming colder, which can’t have helped Icelandic farmers much. They could no longer grow barley. The Greenland settlement died out, its ports frozen, its crops failed, and the local Inuit outcompeting the Norsemen for walrus and caribou. Trade with the rest of Europe was constrained by increasing interference from the Danish government. There were no towns, and villages were small. People lived in hovels of rock and earth, with turf roofs.


Every year, farmers feared not having enough hay to see them through the winter, as they huddled in a single room above their livestock, surrounded by darkness and snow. Spring was the time of starvation, when the crops were planted, the grass was beginning to grow, but as yet there was nothing to feed the sheep or the family cow. There was a feudal system of sorts: rich farmers and poor peasants, but in truth the rich farmers were poor.


And the Icelanders were farmers. The sea around Iceland was teeming with cod and herring, but this was fished by large ships from England, France and Germany. There was some illicit trade with these foreigners, but not much.
Foreigners also came from further afield than Western Europe.  Barbary pirates found Icelandic women easy pickings, plucking them from defenceless coastal communities, and whisking them back to the bazaars of North Africa.

There was one secret source of wealth for the Icelanders during the Middle Ages. Unicorn horn. Unicorns were much prized in Europe: unicorn horn was the most prestigious material to use in court, and ground up it had potent medicinal strength.


The fact that unicorns don’t actually exist wasn’t an insuperable problem for Icelanders and Danish merchants. The narwhal is a small whale with a long spiral horn which is found in the waters around Greenland. Narwhal horn was imported into western Iceland and unicorn horn was exported from eastern Iceland to Denmark from whence it was sold all over Europe.

Iceland reached its nadir at the time of the eruption of the volcano Laki in 1783. This was one of those eruptions, similar to but bigger than Eyjafjallajökull in 2010, which threw tons of ash and in particular sulphur dioxide into the atmosphere. The resulting ‘Haze Famine’ led to the deaths of eighty per cent of the livestock and a quarter of the population. At one point, the remaining Icelanders considered abandoning their country entirely, leaving it to the volcanoes, the glaciers and the bitter cold.


In the following century Icelanders legged it to North America in large numbers, for Iceland, setting up communities in the Midwest and Canada, such as the town of Gimli in Manitoba. These Vestur-Íslendingar would sometimes return home with fancy clothes and stories of wooden houses and roofs which didn’t leak.


Families were large, and then they weren’t, as children died young.


Wealthier Icelanders went abroad for education, to Denmark. They returned to their homeland with ideas. Ideas about national identity, ideas about independence. The Danes gradually acceded to Icelanders’ demands.

Independence came in stages: Iceland got its own constitution in 1874, in 1918 Iceland was recognized as a sovereign state under the Danish Crown and finally in 1944, while Denmark was under Nazi occupation, Iceland declared itself a Republic.


The relationship between Denmark and Iceland is a tricky one. On the one hand, Denmark is and has been for many years a remarkably civilized society with progressive values. Most educated Icelanders used to receive their postgraduate university education there, and many still do. Until quite recently, Danish was the foreign language taught in schools.


And yet. I have met Danes who have been eager to explain Iceland to me on the basis that the country was a former colony of theirs, in the same way a Briton might have spoken about India in the 1960s. Some Icelanders are suspicious of Danes. If Danes try to speak to them in Danish, an Icelander will reply in English.

The First World War was a boom time for Icelanders, as Britain in particular became desperate to import food. The depression took its toll, and then in the Second World War the country was invaded.

On 9 May 1940, Hitler unleashed his cunning master plan to invade Belgium, Luxembourg and Holland, to outflank the French and British armies and within weeks to overrun France itself. On that very same day, the British unleashed their own master plan, to invade Iceland, over a thousand miles in the wrong direction from Belgium.


The British invasion was a total success. They landed, put up their tents and made tea. The Icelanders were a little miffed, but decided to be polite and treat the occupying army as guests. At one point, there were 25,000 British servicemen in Iceland. They provided jobs and wages for the inhabitants. Things really looked up in July 1941, when the British handed over the occupation of the island to 40,000 Americans.


The Americans paid higher wages, and brought chewing gum and nylon stockings to the island. There were at that point more American young men than young Icelandic males in the country. Some say it was a good time to be a young Icelandic woman.

This was when Iceland’s fortunes really turned around. The country moved rapidly from being the poorest country in Europe on a per capita basis in the 1940s, to becoming the richest in 2007. Some of this wealth came directly from the U.S. base, which was expanded during the Cold War. Some of it came from the fish, which the Icelanders now caught for themselves. And some of it came from a highly educated, hard-working population creating wealth.


Icelanders fought three ‘cod wars’ against the British in the 1950s through to the 1970s, establishing their right to extend their fishing limits from there miles, to four miles, to fifty miles and then to two hundred miles. Iceland’s fishing villages boomed; England’s fishing port of Hull went bust.


All countries are a product of their history. You have to be tough to have survived Iceland’s past: the cold, the long, isolated winters of hunger, the long summers of back-breaking toil. It’s worth remembering this.


The twenty-first century Icelander in his Ray-Bans, driving his BMW 4x4 home to his geothermally heated minimalist apartment in Reykjavík is only a generation or two away from almost unimaginable hardship. Dump him on a snowy mountain in the dark miles from anywhere and he will probably know what to do. Put him behind the wheel of his BMW, and he might get a little over-excited; it’s probably a good idea to be extra careful when crossing the road in Reykjavík.

Until now I have been posting on this blog every week, but from now on I intend to post every two weeks, on a Tuesday.   Remember, if you want to subscribe to this blog, hit the white "subscribe" button at the head of this page, and you will receive an email with each post the day it is published.
If you would like to receive a free copy of my 60-page novella The Polar Bear Killing and occasional emails about my books, sign up here.
Iceland Iceland history