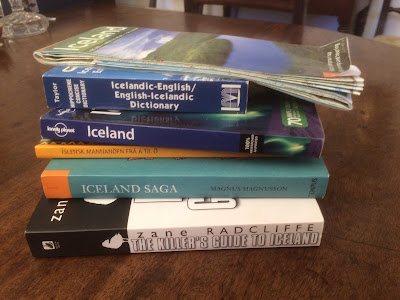 I began to read.  At this stage I was just trying to get a general idea of the country, its society and its people.  Wide was good; serendipity ruled.  I had done this before: I had set books in Brazil and South Africa, and Iceland is much smaller than those two countries, and therefore less daunting.

The first book I picked up was Dreaming of Iceland by Sally Magnusson, a charming description of a one-week holiday the author took with her famous father Magnus back to his homeland.

Then I read Ring of Seasons, by Terry Lacy, an American who has lived in Iceland for many years and The Killer’s Guide to Iceland by Zane Radcliffe, an excellent novel about an Englishman visiting the country and getting himself into deep trouble.  Radcliffe has a way with food similes: lava-like digestive biscuits, glaciers like icing on a cake.  It sounds corny, but it’s actually rather good.

I assumed that there were no crime writers of note in Iceland, which was unforgivably naïve.  In fact, Arnaldur Indridason had written several novels translated into English, one of which, Silence of the Grave, had won the British Crime Writers’ Association Gold Dagger in 2005.  Crime writers like to claim that their novels shine a powerful light on the societies in which they are set, and I think they are correct.  Arnaldur and his detective Erlendur introduced me to a useful range of fictional Icelanders.

On a more mundane level, the ‘Contexts’ sections of the Lonely Planet and Rough Guides were excellent. I find the authors of these guides in particular are diligent and careful and their books are packed full of useful detail.

W.H. Auden and his friend Louis MacNeice produced a whimsical collection of poems and diary entries as payment to Faber for a holiday in Iceland in the 1930s, when the country was the poorest in Europe.  This was updated imaginatively by the modern British poets Simon Armitage and Glyn Maxwell, chronicling their own Icelandic travels in Moon Country.

I soon encountered the Iceland Review, a quarterly magazine with stunning photographs and interesting articles about all aspects of Icelandic life.  The magazine is online, of course, but it’s better in its physical version.

The Iceland Weather Report was a blog by the Icelandic-Canadian Alda Sigmundsdóttir.  The blog no longer exists, but Alda is well worth following on Facebook and elsewhere: over the years, she has given me all sorts of information and ideas.

The Reykjavík Grapevine is a weekly English-language newspaper with a good web presence.

I bought DVDs; I wanted to see what the country actually looked like.  101 Reykjavík, a film of the book by Hallgrímur Helgason, is an enjoyable story of Reykjavík’s nightlife.  Nói Albinói is a bleak tale of the bleak life of a bleak teenager in a small isolated town in the middle of winter.  Seagull’s Laughter is a sweet film set in a fishing village in Iceland in the 1950s.

I was beginning to get some idea of what Iceland was like.  These are the sources I used at the very beginning: I will give much fuller lists of books, websites and films about Iceland in a future post.

I studied history at university, and I like to know the history of any country I write about.  Given my intended plot for the first book in the series, this was especially necessary.

There are, of course, many histories of Iceland, but the one I stumbled across was Iceland Saga by Magnus Magnusson.  This is more than a history.  Magnusson takes his reader on a journey around Iceland to the locations where the major events in the country’s early history took place.  The book really fired my imagination.