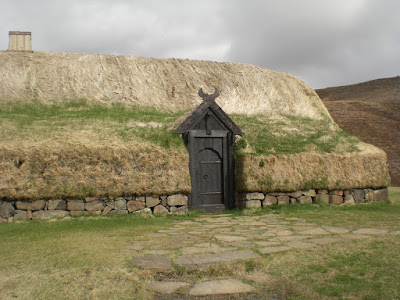 Before there were people in Iceland, there were trees.  Really.  In the ninth century the whole country was covered with trees, and there wasn’t a soul to cut them down.

There are hints that Irish monks may have inhabited Iceland during the early ninth century, and a couple of wayward Vikings sailors stumbled across the island while lost, but the first Viking that we know of who sailed there deliberately was a man called Flóki.  He took three ravens with him to help him find Iceland.  He let them loose.  The first two returned to the ship, but the third flew straight off over the horizon.  Flóki followed it and made landfall.

At first Flóki was dismayed by the cold.  He climbed to the top of a mountain and looking out at drift ice choking the island’s fjords, so he decided to call the country ‘Iceland’.  He returned to Norway disappointed, although one of his mates claimed that in spring butter dripped from every blade of grass.  This optimist was henceforth known as ‘Butter’ Thórólfur, in perhaps the first recorded example of Icelandic irony.

The first visitor to Iceland who actually stayed was Ingólfur Arnarson.  He set out from Norway in 874, and when he spied the mountains of Iceland, he threw his high seat pillars into the sea, vowing to make his home wherever they fetched up.  I’ve never been able to figure out precisely what these ‘high seat pillars’ were, presumably pieces of a disassembled chair.  This does, at least, sound authentically Scandinavian.

Although he made landfall right away, at a place coincidentally called Ingólfshöfdi, or Ingólfur’s Headland, it took him many months to find his chair.  Eventually two of his slaves discovered it in a smoky bay on the west coast, the smoke coming from hot springs.  So this was where Ingólfur made his home.  He decided to call the smoky bay Smoky Bay or Reykjavík.  You will see that the settlers were not very imaginative in their choice of place names.

Norway was becoming crowded, and a lot of people didn’t like their king Harald Fair-Hair (or ‘Fine-Hair’ depending on your view of Viking hairdressing, ‘fine’ as in ‘beautiful’ rather than ‘thin’), so a number sailed off to Iceland in search of free land.

They brought their sheep and horses with them, and cut down the trees for firewood.  Since sheep nibble tree saplings, and the soil in Iceland is particularly thin, the trees never managed to re-establish themselves.  Forestry wasn’t helped by the tendency of volcanoes to dump molten lava over the landscape at irregular intervals.  Now there are no trees.

The couple of hundred years after Ingólfur’s arrival, are known as the Settlement Period.  To my mind, the most extraordinary thing about this time was that there was no ruler.  No king, no emperor, no prince, not even a prime minister.

This was a relatively warm period of European history, and so it was possible to grow crops and feed livestock successfully.  The outer rim of the island was dotted with farms.  Farmers would gather at a local meeting place, known as a ‘Thing’. Once a year, their leaders, or godar as they were known, would travel to the ‘Althing’ at Thingvellir in the south-west of the country near Reykjavík.

Thingvellir was, and still is, an extraordinary place.  It is set in a narrow gorge where the two continental plates meet, next to a flat valley floor.  (This is Iceland; gorges can be next to valley floors, not above or below them; the land moves around a lot).

At the start of the proceedings, the Law Speaker would stand on the Law Speaker’s Rock and recite all the laws from memory for three whole days.  This was before they knew how to write laws down.  The godar would then settle their disputes according to these laws, judged by their peers.  There were occasional flashes of violence, but usually disputes were resolved peacefully.  Outlawry was a punishment for serious crimes, where the guilty party would be sent either into the desolate interior of the country or abroad for a number of years.

During this time, Iceland was mostly peaceful.  There were occasional skirmishes between farmers, but never full-scale battles.  However, it would be wrong to characterize the Icelanders as peace-loving farmers: these were Vikings after all.

Some historians can become quite grumpy about the term ‘Vikings’ and the suggestion that they were nothing more than a bunch of bloodthirsty rapists.  They see the early Icelanders as traders and artists, not looters and pillagers.  The term ‘Viking’ comes from the word vík, which as we have seen means ‘bay’; it can also mean port or trading post, as in Norwich in England.

So the Vikings were what Norsemen were called when they went travelling.  The sagas are full of young men who spend a gap year ‘raiding and trading’ before returning to their farms in Iceland.

These historians also complain that Vikings get a bad rep from the people they were raping and pillaging: monks in Britain, Ireland, France, the Netherlands, Germany, Russia and Sicily, who had an unfair propaganda advantage over their adversaries in that they knew how to write down what happened.  Those that survived could.  Actually, the Norsemen were capable of great art and poetry (all true) and liked to cuddle lambs (also true).

As in all good crime stories, forensics settle the dispute, in this case DNA evidence.  A recent study of the Icelanders’ genome shows that while 75% of the patrilineal DNA comes from Scandinavia, less than 40% of the matrilineal DNA came from there – 62% came from Ireland and Scotland.

So in the past, the majority of men were Norwegians and the majority of women came from the British Isles. My reading of this is many of the raiders and traders came home with women from their years abroad.  Slave women.

Christianity came to Iceland in the year 1000.  Olaf Tryggvason, the king of Norway, had converted a few years earlier and was eager to spread the word across the Viking world.

This was decided, of course, at the Althing.   After days of speeches and acrimony, at which it looked for a moment as if the country would split into two groups with two different sets of laws – pagans and Christians – the decision was given to the Law Speaker of many years, the pagan but very wise Thorgeir.

Thorgeir lay down in his booth, put a cloak over his head and had a good long think.  It lasted all day and all night.  In the morning, he emerged and announced that henceforward Icelanders would be Christians.

There then arose a problem – a lot of people needed to be baptised in a hurry.  There was a river handy at Thingvellir, the powerful, fast-flowing Öxará, but in one of the most un-Icelandic moments in Iceland’s history the chieftains decided that that river was a bit cold, and rode off to the geothermally warm waters of Laugarvatn a few miles away to be dunked.

With Christianity came writing and reading, pastimes that Icelanders have taken to with alacrity over the centuries.  It is likely that literacy was higher in Iceland than in the other medieval countries of Europe.

The reason is probably the nature of settlements in Iceland.  The countryside is dotted with individual farms, rather than the more common villages of Europe.  While some of the larger of these farms had their own churches, most did not.  This meant that Icelanders had to do their own reading of the Bible; they couldn’t rely on priests to do it for them.  This literacy was no doubt a reason for the sophistication of the sagas, the beauty of the medieval poetry and the determination of every Icelander since then to write a book.  More on that later.

From Iceland, adventurous Norsemen ventured further afield.  Erik the Red, an outlaw, sailed from Iceland in 982 to Greenland, and built himself a farm there.  Amazingly, the south-west corner of Greenland is indeed green, as you can see from the picture of Erik the Red's longhouse below. 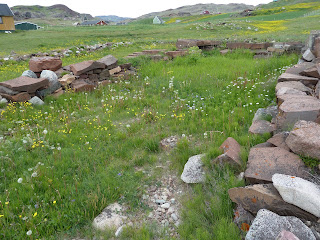 From Eriksfjord, Erik’s son and daughter-in-law took a band of followers south and west to what they called Vinland, but what we now call North America.  It is tantalisingly unclear exactly where they stopped for a couple of summers, although a Viking settlement was discovered in Newfoundland in 1961.
If you would like to receive a free copy of my 60-page novella The Polar Bear Killing and occasional emails about my books, sign up here.